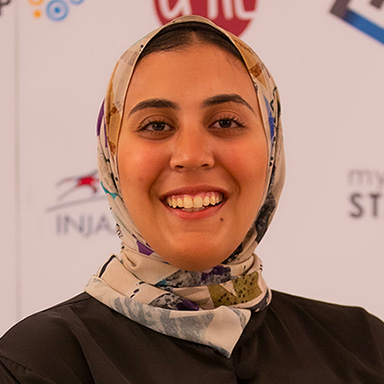 Manar is a social worker, graduating in 2019 from the Faculty of Arts and Department of Sociology at Tanta University. She worked at Dawar on the Sexual and Reproductive Health Project by Image and Forum Theatre with OXFAM, and she worked for 3 years as a facilitator with children and adults on the Drosos Project at El Shehab Development in Ezbt El-Hagana.

She has been volunteering with local NGO’s and INGO’s such as UNICEF and Tdh since 2015.

She has a diploma in Community Action Method By Arts and a diploma in Forum Theatre from Dawar. She took participated in the Active Citizen program, and took a training workshop on Theatre Kids With Simon Di Yong at Dawar .

Manar is a member of the Medfest Festival Film team. 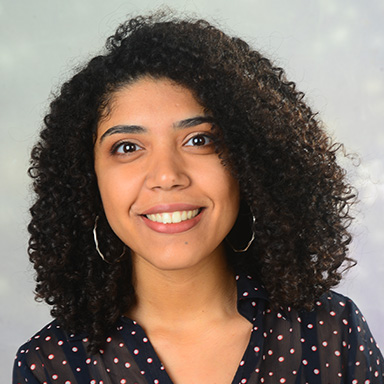 She has volunteering experience with multiple NGOs such as Inno-Peace, Hult-Prize and IIDebate. She has worked on different topics and has been in different positions ranging from editing to coordination. She is also a civic education trainer who has worked with teenagers in middle schools. In addition, she has worked as a project assistant in the field of local governance. She is currently a public law researcher and a part-time lecturer in public international law, which allows her to have good knowledge of research methods.

“Being part of [the] Lazord Fellowship would be a conducive environment to brainstorm, have constructive debates and to work with people who have already worked on the same cause. It’s an opportunity to be part of a team with a vision of the future and whose ideas and projects are sustainable.” 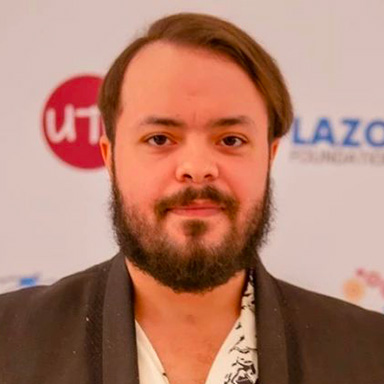 Noomen is a young Tunisian filmmaker and sound designer who holds a bachelor’s degree in civil engineering. After a year of working in this field, he decided to live his dream by studying cinema at the University of Carthage’s Gammarth Higher School of Audiovisual and Cinema (ESAC).

In 2019, he filmed his first amateur independent traveling documentary film (PRAVO) in Serbia about EXIT festival, which was selected in over 17 film festivals.

In 2021 he filmed his first experimental film project (METROPOLIS) within the Ciné Par’Court program, supported by Goethe Institut and produced by CNCI (National Center of Cinema and Picture) in Tunisia

Currently, he is working on his master’s degree at the National School of Architecture and Urban Planning (ENAU). 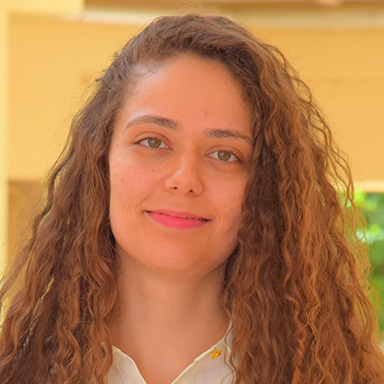 Arij, a highly dedicated and ambitious person, holds a bachelor’s degree in English and is a recent M.A. graduate in English Literature. She has worked as an online translator with an international company. This experience shaped her skills and helped her to become proficient in quick and precise translation. However, Arij has always wondered about ways of introducing change to the world. She decided to explore working with organizations that focus on social change. Volunteering within WeYouth organization granted her the chance to dive deeper into civic engagement and opened her perspectives. The Lazord Fellowship came right on time. It allows her to build her capacities and grants her the chance to implement her newly acquired skills to create change in her region. She is currently placed at the Tunisian Association Against Sexually Transmitted Diseases and AIDS (ATL MST SIDA Sfax) where she is on a continuous journey of learning. Arij will continue wandering and wondering, constantly looking for new challenges to further improve her performance. 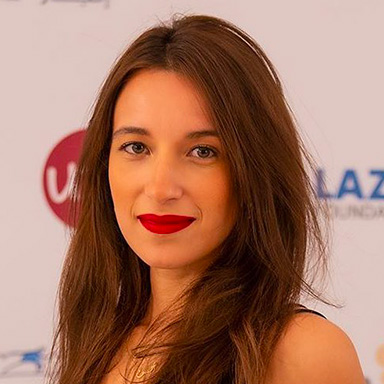 Ons Ben Sassi recently graduated from the Higher Institute of Fine Arts in Tunis with a research master’s degree in interior architecture. Before being placed as a project coordinator in a Tunisian CSO with the Lazord Fellowship, Ons got a certificate in UX/UI design.

She has worked as a founding membre of Rotaract Club, a nonprofit civic-based organisation which focuses on the development of young adults as leaders in their communities and workplaces. She has also participated in Tunisian Model United Nations by being part of a debate on the power of migration flows during the creation of a sustainable economy.

Her native language is Arabic, but she is fluent in spoken and written French and English, and soon German. In addition, she is skilled in digital marketing, web design and design softwares such as 3DsMax, Photoshop, etc. Ons is highly motivated as an ambitious and polyvalent person who brings to bear all her efforts and skills. She will inspire you to do work you’re proud of. 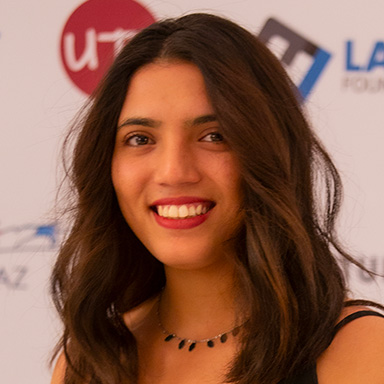 Yassmin is passionate about personal growth, animals rights, global issues and volunteering. She worked at an international company that worked with a US sales department in addition to interning at the post office. She is currently volunteering at Sfax El Meziena as an external relations developer. She has had diverse volunteering experiences with organizations such as AIESEC, the Wonder, the Red Cross, and PNUD. She is a native speaker of Arabic, has an advanced level in French, and is fluent in English. Yasmin is always looking for new opportunities to challenge herself, learn new things, fulfill her potential, enhance her skills and network. 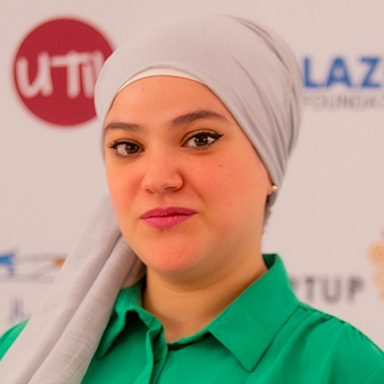 Rania has a background in law, with a bachelor’s degree in private law and a master’s degree in democracy and electoral management. She is passionate about women’s rights, minority rights, and children with disabilities. She volunteer in a deaf mute association, and is now working with Article 19 through the Lazord Fellowship.

“The greatest glory in living lies not in never falling, but in rising every time we fall.” -Nelson Mandela 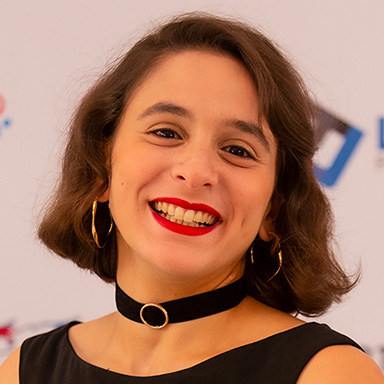 Aya is from Manouba, Tunis, and she chose to become a Lazord Fellow because she wanted to develop her skills and learn how professional life and its dynamics work. This will help her find a spot in the job market, or help others find one by creating her own business.

She is an active and dynamic scout leader who is interested in sustainable development and sustainability in general. She has been the regional coordinator and commissioner for 2 years, and she is interested in entrepreneurship, human rights, and SDG advocacy. Lastly, shes love coaching conversational English to professionals who need it.

If Aya had a superpower, she would encourage the use of technology to make the world greener, and to help stabilize the environment for future generations. 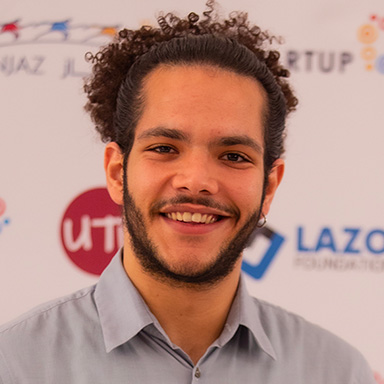 Iheb works with the Arab Institute for Human Rights as a project assistant. After graduating from the Mediterranean School of Business with a degree in business administration, Iheb worked as a public relations executive at a media communications agency, managing a broad portfolio of local and international clients. Iheb has a strong knowledge of campaign planning, reporting, media monitoring, and news fact-checking. His passion for gender equality issues, economic development, and human rights has driven him to pursue a master’s degree in political science and democratic governance. Reporting, research methods, and academic writing are strong areas of his expertise, as he speaks and writes English, French, and Arabic fluently. A self-motivated aspiring change-maker with an unquenchable thirst for knowledge, Iheb is an unrelenting learner with a sharp eye for detail. 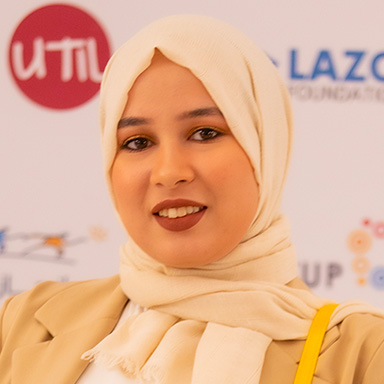 Khouloud works to create change in the health care services, for them to be human-centered and gender oriented. She graduated as a midwife from the higher school of health sciences and techniques in 2021. She is currently pursuing a master’s degree in human rights and international humanitarian law, in parallel with a master’s degree in governance of public policy. In 2021, she won the Ambassador for a Day competition that was organized by the British Embassy in Tunisia. She co-founded an independent movement, Ambassadors for Equality, which provides programs to empower underserved girls and young women to claim their rights and create a healthier environment where they can live free from discrimination and violence. She and her team implemented two programs, TeenGirlsLead and Power Voices Challenge.

Khoulud’s journey with the Academy of National Dialogue (AND) began in 2020 as a project manager. She managed a team, organized and moderated 2 seminars about gender equality and women’s rights, one in collaboration with the municipality of Tunis, and the other in collaboration with the International Foundation for Electoral Systems (IFES), where she demonstrated great public speaking and team-work skills. She also organized and moderated online seminars about education, environment and local authority after the pandemic. She is a trainer in human rights, gender equality, and democracy, and has facilitated workshops and dialogue sessions on different subjects.