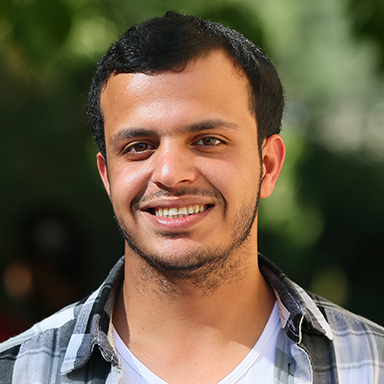 Bachelor of Arts in Business Administration

Osaid Zkarneh obtained a diploma in Industrial Chemical Technology from Al-Balqa Applied University in 2014, and is currently studying for a Bachelor of Arts in Business Administration at the Arab Open University.

Osaid joined ACTED’s REACH Initiative as Senior Field Officer. He has also worked for other NGOs in positions such as International Programs Coordinator at Generations For Peace (through the Lazord Fellowship), and project coordinator at Bait Al Hikmah Foundation for youth and BLIMATCH (Blind Telematch) Youth Project. Osaid has also been involved in several volunteering opportunities with organizations such as Princess Basma Youth Resource Centre, ActionAid, Jordanian Women Qualifying and Training Society, United Nations Volunteers, Al Jude for Scientific Care, International Youth Foundation, and Leaders of Tomorrow. In addition, he is a member of many regional and international youth networks and organizations such as Activista International Network, Electron Youth Network, and the North-South Centre of the Council of Europe Network. In 2017-2018, Osaid was part of the first group of Eisenhower Fellowship’s Youth Leaders.